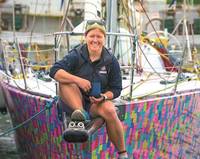 After 3 years of preparations and 6 months at sea Lisa Blair has made history by officially being the first woman of circumnavigate Antarctica.

After 72 days of travelling solo and unassisted, her 50-foot yacht, Climate Action Now was dismasted and Lisa built a jury-rig and motor sailed to Cape Town in South Africa after receiving fuel from a container ship.

After spending two months repairing her yacht Lisa left Royal Cape Yacht Club on Sunday, 11 June 2017.   She sailed back to the position of the dismasting and crossed her track, re-sailing the section again unassisted.  After battling seasickness, snowstorms, a severe knockdown, and exhaustion she arrived in Albany, completing her journey on 25 July 2017.

As one of Lisa's sponsors we are very proud of her achievement and thrilled that we could support her epic journey.  In conjunction with Solbian Italy we supplied eight Solbian solar panels and eight Genasun solar charge controllers for her yacht.